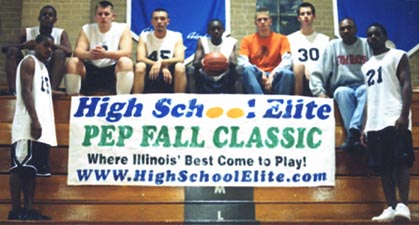 By Frank Rusnak
In an action-filled weekend at Riverside-Brookfield High School for the fourth annual High School Elite PEP Fall Classic it was only fitting that the championship game be decided on a last minute call.

With the Illinois Warriors up 49-48, Team Bloomington’s 6’7” Tim Gould grabbed a missed shot from teammate Dodie Dunson. With one second remaining, Gould was put to the free-throw line for two shots. Missing both shots, Gould’s teammate, 6’3” Wesley Ware (Bloomington H.S.), grabbed the rebound and went back up for a quick put-back. The basket, however, was waived off as the refs said time already expired, and the Illinois Warriors grabbed its first title at the HSE/PEP Fall Classic.

In command for the Warriors was 6’1” junior combo guard Brandon Ewing. Ewing, the MVP of the tournament, finished with 15 points in the championship game, including a perfect 7-for-7 from the free-throw line.

“This tournament was great,” said Ewing, of Chicago Julian. “It was one of the top tournaments and it had a lot of competition.”

Team Bloomington is a squad that Ewing was all too familiar with in the championship game.

“I’ve been playing against those guys since seventh grade,” he said. “It seems like they’ve got pretty much the same guys. They have great chemistry. I always take notes from Dodie, he leads his team really good.”

Dunson was held to only six points in the championship game.

“Dodie was sick,” Dunson’s father and coach, Dodie Sr. said. “He didn’t want to say anything to me because he knew I wouldn’t let him play if I knew, but we took him to get checked out by the doctor [Monday].”

With a temperature hovering around 103-degrees, Dunson did however average 14.25 points for the tournament in his team’s four games. They included wins against the Illinois Wolves, Illinois Warriors II and Old Gold in a rugged, physical semifinals match.

“I thought the basket was good from my angle that I saw,” said Dunson, about the deciding call in the championship game. “[The Warriors] stepped it up at the end though just to get the win.”