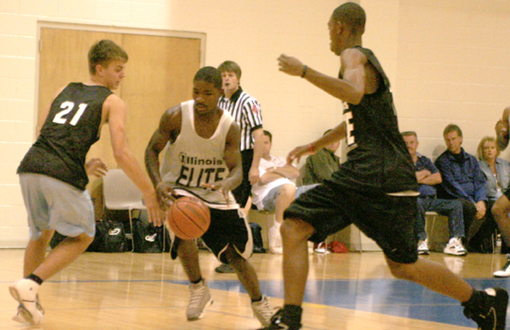 By Frank Rusnak
Julian Wright admitted he wasn’t in the best of shape.

Pointing to Osgood Slaughters, a pain in the knee due to rapid growth, and not being in good basketball shape, Homewood-Flossmoor’s 6’7” small forward was still good enough to leave as the most elite player of the third annual High School Elite Top 50 Junior Showcase on Oct. 19 at North Park University.

The state’s top player from the class of 2005, Wright displayed his usual array of scoring, passing, rebounding and overall all-around skills.

Wright was particularly impressed with the 6’7” wide-bodied Thomas with massive hands and a pop to his step of a man 50 pounds lighter.

“My favorite play was when DeAndre caught the ball and did a ball fake,” Wright said. “He drop-stepped and dunked it with one hand over someone. That was nice.”

Jeremy Moss, a smooth high-leaping Centralia guard, thought Brandon Ewing from Julian and Maurice Acker from Hillcrest were the most fun to watch on his team.

“Brandon Ewing; his defense was killin the other guys,” Moss said. “They couldn’t go anywhere. ‘Reese Acker, he’s got heart. He’s not afraid to take it up against anyone.”

At half-time of the event, the dunk contest was in full display where a pair of 6’1” players were left standing at the end. Rich South’s Jeremy Winters missed both of his dunk attempts in the championship round which left the door wide open for Angel Santiago of Von Steuben. Santiago used a junior high kid out of the stands as a prop, to which he leaped over and defiantly slammed the ball through the hoop. The dunk trophies are beginning to add up at Von Steuben as senior Ryne Hamblet won the Top 50 dunk contest last year and senior Demetrius Evans won the IHSA dunk contest this year.

The combination of Leyden’s 6’8” Aaron Jimenez and 6’5” Marcus Green was one that impressed fellow west suburban player, Tony Freeman of St. Joseph.

“The big guy from Leyden, I thought he was a senior,” Freeman said. “He can jump and has good footwork. He’s nice. With him and Marcus, they are going to beat Proviso East this year.”

The second player to point to sportsmanship as the best part of the shootout was Belleville West’s Arthur Sargent. Sargent is a 6’4” wing forward who doubles as a wide receiver on the football team where he scored on a 39-yard touchdown pass in his team’s win over Granite City two days earlier.

“Everybody was complimenting everyone else and helping each other up,” Sargent said. “I never played with none of these guys, but no one was being selfish.”

The surprise of the event was Peoria Manual’s DeMar McKnight, a virtual unknown prior to Sunday. A 6’7” power forward, McKnight will not play this high school season because of kidney surgery that he is scheduled for. Expected to play his senior year, if the surgery and recouping process are successful, McKnight has a bright basketball future ahead of him.