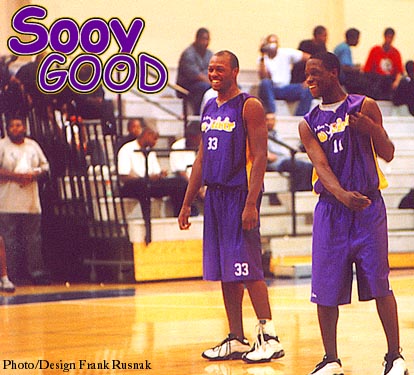 Richard McBride (left) and Dan Ruffin laugh it up on their way to leading
Ft. Sooy No Limit to the championship of the third annual
High School Elite PEP Fall Classic.

In a final four pitting the RBS All-Stars versus the Chicago Demons on the top and the Illinois Fire and Ft. Sooy No Limit on the bottom, the finals were sure to be a memorable one whichever way the cards fell.

The Demons barely edged out RBS in the top bracket while being led by 6'5" junior Ryne Hamblet (Von Steuben). In the bottom bracket, Ft. Sooy had redemption on its minds dating back to a tournament in New York during the summer, in which the Fire topped them. Ft. Sooy outlasted the Chicago-based Fire behind the play of tournament MVP Richard McBride (Springfield Lanphier).

In the championship game, it was only both team's fourth game of the tournament (second of the day) so fatigue didn't come into play, although Ft. Sooy's Shaun Livingston (Peoria Central) felt under the weather.

The Demons consisted of all players from Von Steuben High School, which is considered one of the early favorites as the top squad in Chicago. Holding the lead for the majority of the game, the Demons went into half-time with a 33-30 advantage.

The Demons junior combo of Hamblet and fellow 6'5" forward Demetrius Evans did their best to keep their team ahead with 14 and 20 points, respectively. However, Ft. Sooy never said die, fighting back for the lead as the time drained out of the game.

Otherwise quiet for the tournament, Ft. Sooy's Brandon Lee (Peoria Central) lit the nets up for a team-high 14 points (three 3-pointers) in the final game. In the waning seconds, McBride connected on a bucket close to the hoop to edge out the Demons for the title, 63-62.

In the loser's bracket, the Illinois Warriors II team overcame the Illinois Gunners. The Warriors were led by its forward combination of 6'5" junior DeAaron Williams (Limestone) and 6'7" sophomore Julian Wright (Homewood-Flossmoor). The Gunners were paced by its three-headed monster of 6'1" senior Cedrick Middleton (Marian Catholic), 6'5" senior Marcus Medsker (Quincy) and 6'6" junior Dustin Warfield (Peoria Richwoods), which caused fits for its opponents.

Once again, the High School Elite PEP Fall Classic proved to be a good proving ground for a vast majority of the state's top players and AAU teams, while allowing many previously hidden gems a platform to shine.