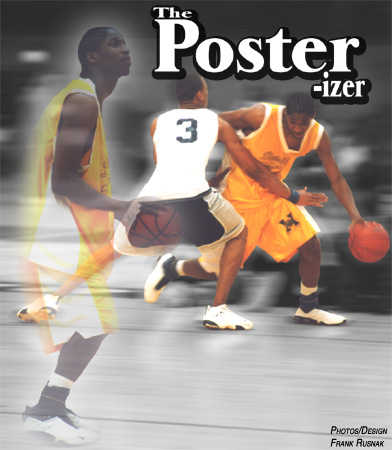 Hitting a hot streak of late, Von Steuben's Demetrius Evans
hopes to lead his Panthers to a state or city title this season.

--2-14-04--
By Frank Rusnak
Demetrius Evans has leaped into the scoring lead on his Von Steuben team averaging 24 points in his last 11 games.

Jumping over competition is something the 6'5" forward is used to; from his current days all the way back to his preteen years.

In grammar school Evans was a lanky and athletic wide receiver in football. "I would just jump over people to catch passes," he said.

In 2003, Evans won the IHSA King of the Hill Dunk Contest. He said he has a 43-inch vertical, but believes it has increased since he last measured it as a junior.

"Ever since I met him in eighth grade he just could jump, and now he's jumping even higher," said Von Steuben coach Vince Carter.

But don't label Evans as a skill-less athlete playing basketball.

"Percentage wise he's probably the best three-point shooter on the team, but he just doesn't take that many," Carter said. "Now he's got that little move where he just puts the ball on the floor one dribble or two dribbles and rises over the defender and shoots it. I was trying to get him to do that as a freshmen, but he just wouldn't do it. I think his natural position is a three."

With an accurate, pretty, high-rising jump shot, Evans scored a career-high 33 points against Lane Tech on Feb. 6 to help Von Steuben clinch the Red-North title for the fourth year in a row.

After advancing to the Class AA Elite Eight last season, Evans wants more in his last year of high school.

"I went Downstate last year; I'm just hungry for a state title or a city title," he said. "I've got to get one of them before I leave."

Evans will get his chance at the latter when his Panthers (18-5) continue in the Chicago Public League Playoffs today versus CVS.

While Evans usually uses his finesse and athletic ability to get by larger defenders in the post, he has went from a 170-pound frail freshman to a cut 195 pounds.

While Evans has been on a tear lately -- he is averaging 19 points and 11 rebounds on the season -- his point totals aren't what concern him.

"Winning is my favorite part of basketball," he said. "It doesn't matter if I score 30 or three as long as we win the game."

Colleges love his mentality and the qualities that he brings to the court, which is why many junior colleges have been hanging around the school lately.

Evans and teammate Ryne Hamblet, also a 6'5" senior, are both unexpected academic qualifiers, but would like to continue their schooling together in college.

"Demetrius and I are looking to go to the same college," said Hamblet, who lists Indian Hills (IA), Iowa Western, Colby (KS) as the tandem's options.

"Demetrius and Ryne compliment each other well and somebody's going to be real happy," Carter said. "They look out for each other. With other guys, it was something outrageous every week and guys would always get into trouble. But they are good people and aren't doing outrageous things off the court."

Carter expects big things from his team this season and hopes what he calls one of the state's toughest schedules pays dividends in the playoffs. But he begrudgingly admits that Evans' best days may be ahead of him as he projects him to be a better player in college than in high school.

"Now his confidence is growing, so he's going to be really good when he gets to college," Carter said. "I could just see it, like this flower or this tree just growing up." .... and up, and up, and up. Evans just keeps rising.