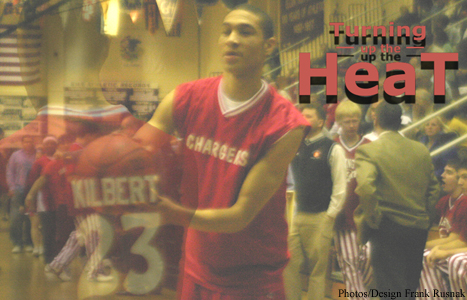 Led by C.C. Kilbert, nobody predicted Dundee-Crown would still be left standing,
as they have the worst record of the 32 remaining teams in the Class AA tournament.

--3-12-04--
By Frank Rusnak
When Dundee-Crown’s C.C. Kilbert gets hot, he develops chronic headaches that require medication. The one cure, he said, is to be on the basketball court.

“When I start to get real hot I get the headaches for no reason,” said Kilbert, who averages a team-high 16 points a game. “I get hot a lot at the end of the game, but I really don’t even realize it at the time because I’m so motivated.”

In a win against Barrington on Wednesday, Kilbert ended with 18 of his game-high 25 points after halftime. In the second-half, he hit a basket on five separate occasions to either give his team the lead or tie the game.

“He’s our go-to-guy when we get down and the game is close,” said teammate Sam Lynch, a sophomore starter in the backcourt with Kilbert.

Along with the headaches, Kilbert is nursing a sore shoulder, tendinitis in his knee and an ankle sprain. If that wasn’t enough, he suffered a concussion in his team’s second game of the season and missed the next six games.

“We’ve been going through a lot of stuff; players quitting, me being injured and all of this is just making us stronger,” said Kilbert, a 6’1” point guard with a silver-quick first step.

D-C has been known mostly for its wrestling of late, but this year’s team is starting to reestablish the basketball tradition it used to have, first-year Chargers coach Lance Huber said.

“We were really going down the stinker at the beginning of the season,” Huber said. “I think we’ve missed everybody at one time this season. Most of it has been sickness and injury then some off the court problems, but our guys have had to really grow up.”

At 15-13, D-C has the worst record of the 32 remaining teams in the Class AA tournament and finished the regular season below .500.

“We are going to be a Cinderella this year,” said Kilbert, who is undecided on a college. “A lot of people didn’t even think we were going to get this far. People predicted it to be Prairie Ridge versus Barrington in the finals. If you see it now, it’s not happening. It’s Dundee-Crown versus Prairie Ridge and we’ll see what happens from there.”