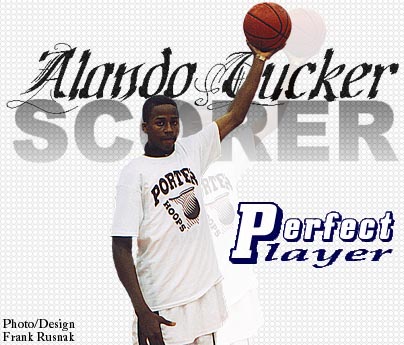 Totally an astounding 46-percent of his team's total points for the season,
Lockport's Alando Tucker has made his case for the state's top scorer.

By Frank Rusnak
There are players that can stroke the ball like you wouldn't believe, and there are ones that can get to the basket on their man at about any time during the course of a game. A good scorer is not necessarily either one of those by themselves. Simply said, a prolific scorer is one that can put the ball in the hole -- by whatever means necessary.

Guys like Lyons Township's Jim Maley, Providence St. Mel's Stan Gaines and Sycamore's Justin Wilson used about every trick in the book, whether it be prolific outside shooting, using to their size and athleticism to produce buckets near the hoop, or their hot-shooting to decoy the defenders close to them only to blow by them for an easier shot.

You can't forget about Metamora's Dan Adams. While Adams was one of the state's most productive scorers prior to this year, he was unable to compete his senior year after suffering a partial tear of the anterior cruciate ligament in his left knee at the onset of the season. The 6'5", strongly built Adams possessed one of the state's sweetest strokes and tore up the nets to the tune of 28 points as a junior.

But for the head man when it comes to scoring, Lockport's Alando Tucker severs himself from the pack.

Yes, there are people who averaged more points than Alando Tucker's 22 per game average, but none scored in quite the fashion that he did. The go-to-player for Lockport, Tucker was the Porter's first second and third option on offense, and rarely failed when called upon by coach Larry Thompson.

While one would think that a team with the a high-flying, athletically gifted, scoring juggernaut such as Tucker would imply an offense not geared for the faint of heart, with a run-and-gun style. However, Lockport played a half-court style of play that was very conducive to a tired scoreboard operator. With Lockport averaging less than 50 points a game, Tucker was responsible for a extraordinary 46-percent of his team's scoring. Bound for the University of Wisconsin next year, Tucker should be at home with the Badgers trying to implore more of a high-tempo system. However, if they revert back to their old, slow-down method, you can bet Tucker will be prepared either way.